In the name of Allah, the Beneficent, the Merciful 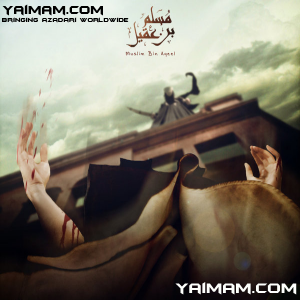 Imam Hussain(a.s.)’s caravan left Madina on 28th of Rajab, 60 A.H. and reached Makkah on the 4th of Shabaan. Imam(a.s.) had not yet made up his mind on where to go. For the time being he decided to stay in Meakkah at least until the month of Zil-Hajj and perform the pilgrimage.

The people of Kufa in Iraq heard of what had happened in Madina. Kufa was an important Shiah centre. The Shiahs there had long suffered under Muawiya. They feared even greater sufferings under Yazid. They felt that slowly Islam would be totally destroyed by the greed for power and glory of these two men. They were anxious to preserve the teachings of the Holy Prophet(pbuh&hf). They needed an Imam who would teach the tafseer of the Holy Quran and relate to them the true sayings, ahaadees, of the Holy Prophet(pbuh&hf). They held a meeting in the house of Sulayman bin Surad, a companion of the Holy Prophet(pbuh&hf), and decided to write a letter to Imam Hussain(a.s.) to invite him. Hazrat Salman(a.r.) said in this meeting “You should be aware that Moawiya has died and Imam Hussain(a.s.) has declined the baiyat (allegiance) of Yazid and he has gone to Makkah. You are his and his father’s Shiahs. If you strongly believe that you will not falter in helping him and fighting his enemies then I invite you to write him a letter but if you feel weakness and fear then for God’s sake, do not betray a person and endanger his life”.

In this letter they wrote: “This letter is to Hussain ibn-e-Ali(a.s.) from Sulayman bin Sard, Mussayab bin Najiyah, Rafaah bin Shaddad, Habib ibn-e-Mazahir and other friends among the Muslims and Momineen of Kufa.” This was followed by the information of Moawiya’s death and Yazid’s becoming caliph. Then they wrote “We invite you to come to Kufa as we have no Imam to guide us. Through you, Allah will unite us on the path of truth. The Governor of Damascus Noman bin Basheer is in the Dar-al-Amarah but we do not participate in Salat-il-Juma with him neither we pray salt-il-Eid with him. If we know that you are coming then we will force him to get out of here and go back to Syria.”

When Imaam Hussain(a.s.) received so many petitions and messages from Kufa he decided to send his cousin Hazrat Muslim bin Aqeel(a.s.) as his emissary to Kufa to study the situation there and report to Imam(a.s.). Imam Hussain(a.s.) would go only if there would be no danger to the people of Kufa or to Imam(a.s.) or any of his companions or family.

He wrote a letter to the people of Kufa and gave it to Hazrat Muslim(a.s.). In this letter Imam(a.s.) said, “I am sending my cousin and one of the most trusted ones from my family, Muslim ibne Aqeel, to report to me about your affairs. If his report agrees with what you have written I will soon be with you. You must be clear of the fact that the Imam is the one who follows the book of Allah only, and serves Allah in all matters and affairs with justice, honesty and truth and submits to the command of Allah.”

Who was Muslim ibne Aqeel(a.s.)? He was the son of Aqeel ibne Abu Taalib(a.s.) – the real brother of Imam Ali(a.s.). He was a famous warrior. He married Ruqayya binte Imam Ali(a.s.) – Imam Hussain(a.s.)’s sister through another mother. We know of his four children – Abdullah aged about 15 years, Muhammad who was about ten years old, Ibraheem who was eight and young Ruqayya who was just five or six. All these children had travelled with their parents and were in Makkah.

As Hazrat Muslim(a.s.) was preparing for the journey, Imam Hussain(a.s.) went to him and said: “Muslim, the whole world knows that you are one of the bravest warriors. It is just possible that seeing you in Kufa some people may think that our intention is to fight Yazid. Take your two sons Muhammad and Ibraheem with you. When they see you with such young children, they will know that our intentions are peaceful”.

Hazrat Muslim(a.s.) and his two sons said good-bye to all and left Makkah. Their journey through the desert in the heat of summer was very difficult. They arrived in Kufa towards the end of Ze’Qaad. They were received extremely warmly by the people of Kufa. At the time of his arrival, Sulayman bin Surad was not present in Kufa, therefore, Hazrat Muslim(a.s.) stayed in the house of Mukhtar bin Abi Abaida Saqafi. The news of his arrival spread like wild fire in Kufa and people started visiting him in groups. Very soon more than 18,000 people appeared before Hazrat Muslim(a.s.) and pledged their allegiance to Imam Hussain(a.s.) as their Imam (Tareekh-e-Tabri, Vol.6-Page 211).

It is important to note here that this figure reflects the number of people who pledger allegiance at that time but they were not all true followers and die hard supporters of Imam Hussain(a.s.). Kufa had been ruled by Ziyad and Aal-e-Ziyad for 20 years during which they committed unmatched atrocities on the followers of Ahl-e-Bait(a.s.) and any one known to be sympathetic to Imam Ali(a.s.) was victimized and killed. Under these circumstances, it is correct to conclude that true followers of Imam Ali(a.s.) in that crowd were only a handful and the others had joined them only because they were fedup with the rule of Moawiya and were not in favour of Yazid becoming the next caliph.

Hazrat Muslim(a.s.) reported to Imam Hussain(a.s.) through Abis ibne Shabib that most of the people in Kufa were ready to receive him as their Imam and advised that Imam(a.s.) should proceed to Kufa (Tareekh-e-Tabri, Vol.6, Page211). Amongst the people of Kufa there were many spies employed by Yazid to report to him directly. When Yazid heard from them of the invitations to Imam Hussain(a.s.) and the arrival in Kufa of Hazrat Muslim(a.s.) he was filled with fury. He sent a message to his Governor in Basrah, Ubaydullah ibne Ziyad, to go to Kufa and take over the position of Nu’amaan ibne Basheer. Ibne Ziyad was also told to arrest Hazrat Muslim(a.s.) and kill him and do all that was necessary to suppress the Shiahs in Kufa.

Ibne Ziyad was a cruel, unjust and shrewed man. He kept his journey from Basra to Kufa a secret and just before entering Kufa he covered his face with a black scart so that he could not be recognized. He had a few horsemen in front of him and a few behing him as he entered Kufa. The people of Kufa had been waiting for the arrival of Imam Hussain(a.s.) anxiously and they presumed that the Imam had arrived. Soon people started gathering around him and singing welcoming songs. Ine Ziyad kept observing the people and memorizing faces as the crowd grew and soon it was difficult for his convoy to proceed swiftly. One of his guards, Muslim bin Amr Bahili, shouted “Clear the way, this is the Amir Ubaidullah ibne Ziyad”. Hearing this, people started running away quickly and when ibne Ziyad reached the Dar-al-Amara only a handful people had been left. Ibne Ziyad arrived in Kufa on the evening of 2nd Zil-Hajj. On the following day he went to the mosque and addressed the people of Kufa. He first announced his appointment as Yazid’s governor. He then threatened any one who was engaged in any activity against the government with immediate death, and ordered them to surrender Hazrat Muslim(a.s.) to him.

Ibne Ziyad sealed Kufa in such a way that no one could go in or out of the city without the governor’s permission.

Since several people knew that he was staying with Mukhtar Saqafi, Hazrat Muslim(a.s.) decided to move from there as a measure of precaucion and protection. At the invitation of Hani ibn-e-Urwah(a.r.), another leading member of the Shiah community, he moved to Hani’s house. This was done secretly and except for a few people no one knew where Hazrat Muslim(a.s.) was. Through a spy, Maaqal, who pretended to be a Shiah, Ibne Ziyad found out where Hazrat Muslim(a.s.) was. Since ibne Ziyad had prior relations with Hani(a.r.), he called him by trick to his palace and got him arrested and thrown into prison. Hazrat Muslaim(a.s.) got the news of Hanis arrest and not wishing to further endanger the lives of his friends, Hazrat Muslim(a.s.) and his two sons left Hani’s house. He left the children with Qadhi Shurayb, a judge, and went into the desert to try and get back to Imam Hussain(a.s.) to warn him not to go to Kufa. This was the 7th of Zil-Hajj. That whole day and the following day Hazrat Muslim(a.s.) tried to get out of the city. He found all the exists sealed and guarded by Ibne Ziyad Soldiers.

On the 8th, late in the evening, tired, hungry and exhausted, Hazrat Muslim(a.s.) knocked at the door of a house on the outskirts of the city. A lady opened the door. Hazrat Muslim(a.s.) requested for a little water to quench his thirst. The lady gave him water. When she learnt who he was, she invited him in and offered him shelter for the night. This lady was called Tau’aa. She gave Hazrat Muslim(a.s.) some food and water and took him to a room where he might spend the night.

Late that night Tau’aa’s son came home. When he learnt that the man Ibne Ziyad was looking for was in his mother’s house, he felt that he would be rewarded by the governor if he got Hazrat Muslim(a.s.) arrested. Unknown to his mother he slipped out in the darkness of the night and gave the information to a captain in ibne Ziyad army. Early the next morning, five hundred soldiers under the leadership of Mohammad bin Ashas surrounded the house of Tau’aa and demanded Hazrat Muslim(a.s.)’s surrender. Hazrat Muslim(a.s.) came out holding his sword. Three times he drove the enemy away and killed 150 men. Twice Ibne Ziyad had to send in reinforcements.

While Hazrat Muslim was fighting, some soldiers went up the rooftops and began throwing stones and lighted torches at him. Others dug a trench in the path of Hazrat Muslim(a.s.) and covered it with grass. Ibne Ziyad told him commanders to trick Hazrat Muslim(a.s.) otherwise it would not be possible to capture him. Although badly wounded and totally exhausted, Hazrat Muslim(a.s.) kept on fighting. As a trick, soldiers of ibne Ziyad offered peace and protection to Hazrat Muslim(a.s.) but he rejected the offer. He was deeply wounded in this tough fight and finally fell into the trench. More than fifty soldiers pounced upon him and chained him. He was dragged to the court of Ibne Ziyad.

Ibne Ziyad told Hazrat Muslim(a.s.) that he would be killed and asked him if he had any last wishes. Hazrat Muslim(a.s.) said: “I owe a debt which should be discharged by selling off my sword and armour. Secondly I want my body to be given a proper burial. Thirdly I want a message sent to Imam Hussain(a.s.) advising him not to come to Kufa.” Ibne Ziyad agreed to the first request but refused to do anything about the second and third requests. He then ordered Hazrat Muslim(a.s.) to be taken to the roof of the palace to be executed and his body thrown to the ground.

One of the Largest Shia Websites. Bringing Azadari Worldwide. Please Recite a Surah Fateha For all Marhoom Momineen and Mominaat.

Join Us on Social Media